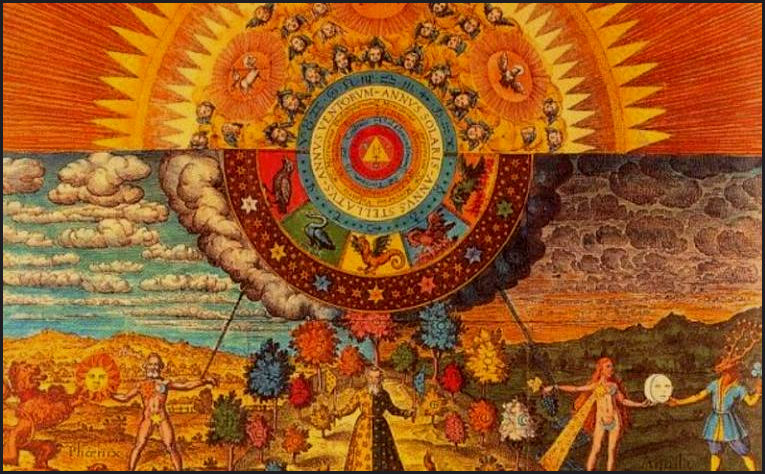 “Anaximenes…attributed all the causes of things to infinite Air, and did not deny that there were Gods; yet he believed not that Air was made by them, but that they arose from Air.” (1)

Anaximenes’ cosmology centers on Air, and this year Mercury is spending more time in the Air signs than all the other signs combined. In the previous blogs of this series, we noticed how the philosophy of Anaximenes laid the foundation for the Western understanding of the nature of the four elements (via four qualities) as a well as connection between the microcosm and macrocosm. (2) Importantly, Augustine reminds us that the Air upon which Anaximenes based his philosophy and cosmology was not the “common” atmospheric air, but something more transcendent — more transcendent even than the Gods.

The ancient alchemists saw Mercury in a similar fashion. Certainly mercurius vulgaris, the common elemental form of Mercury, figured importantly in their work. But this work in the “below” (or microcosm) was far from the end goal. Rather, the alchemists sought the rarefied presence of Mercurius philosophorum — which Jung described as “the world-creating Spirit concealed or imprisoned in matter.” (3) And of course the duality inherent in these two different forms is inherent to both Mercury and its diurnal home of Gemini, for alchemical Mercury is at once both “the innermost point and at the same time the encompasser of the World.” (4)

What this means, in more practical terms, is that we must remember during this upcoming retrograde that we are being moved — not merely by the common forces of the mundane world — but more importantly, by something which is foundational, even to the Gods. In terms of the Tarot, these separate forces are indicated by the minor arcana and royal cards versus the more archetypal dimensions of the major arcana. The Jungian psychologist James Hollis referred to this split in terms of the human life span, saying that the question in the first half of life is, “What does the world want of me?” whereas the question of the second half of life becomes, “What does the Soul (or Gods) want of me?”  Depending on our development, we may need to focus on one of these questions, but during the upcoming retrograde these questions may be confounding and difficult to untangle. Jung said that this “tension of opposites” was not only necessary, but the source of all growth. And inasmuch as we are able to tolerate and even sustain this tension, we have the capacity to allow the unconscious to birth a “magical third” which resolves the conflict in a way we cannot foresee. (5)

Beyond the inherent dualistic tendencies of Gemini, there are other reasons to think this difficult tension between the common or everyday mercury and the philosophical mercury will be heightened in the upcoming retrograde. Award-winning astrologers Michael Munkasey and Robert Blaschke employed a technique whereby the difficulty level of the three retrogrades each year are sorted according to their duration, degrees of travel and relative speed of Mercury at cazimi. (6) Because this upcoming retrograde lasts the longest (25 days), has the shortest span of degrees (8°35’) and the slowest speed at cazimi (0° 33’/day) — it is expected to be the most difficult of the three this year.

In terms of the individual, this means that the affairs of the house occupied by Gemini are about to become very much intensified. In my own book on the subject, I found it useful to sort the houses into four basic combinations based on the rising sign of an individual nativity. (7) Using the ancient Whole Sign house method (also employed by modern horoscope writers), the three signs of the Air triplicity must represent either houses 1, 5, 9; or houses 2, 6, 10; or houses 3, 7, 11, or houses 4,8, 12, in any given nativity. I then use the angular house of each of these combinations to define the meaning of the group, or Trigon.

For Air rising signs the three retrogrades of 2021 will activate houses 1, 5 & 9. These are labeled the Trigon of Identity, and it is posited that this year’s retrogrades will most significantly impact the nature of the various social personas (1st house) available to the person; the creative outlets (5th house) which arise from their choice of persona, and the new horizons which open up (9th house) as a result of engaging these creative opportunities. During the coming retrograde, Geminis are developing a new identity by combining various cultural, philosophical or religious ideas in novel ways. For Libra, it becomes important to focus on personal creativity as a means or window to the transcendent. Aquarians should focus on developing a new persona by exploring more of the creative possibilities which are  afforded to them.

For Earth rising signs the Mercury Elemental Year of Air will activate houses 2, 6 & 10. Because the 10th is related to career, I have dubbed these houses the Trigon of Mastery, and it is posited that these retrogrades will most significantly impact the tangible and intangible resources (2nd) which are available to a person; the skill sets (6th) they develop in learning to manage these resources, and the career (10th) which develops as a result of bringing these skills out into the public eye. During the coming retrograde, continued professional development for Taurus requires the discovery of new inner strengths which will point the way to new income. By being willing to be seen, and even shine, Virgos can use their latest competencies to transform the nature of their profession. Capricorns should focus on developing the new skills needed to fully take advantage of their most recent harvests.

For Fire rising signs, the Mercury Elemental Year of Air will activate the houses 3, 7 & 11. Because the 7th is about relationships, I have dubbed these houses the Relationship Trigon. It is posited that these retrogrades will most significantly impact the 7th house of one-on-one relationships, the 11th house of intra-group relationships, and the 3rd house of inter-group relationships. Here we see a somewhat novel concept that I realized in examining these Trigons. Essentially there are three types of relationship: person to person as individuals (7th); person to person within a group of common interest (11th), and person to person as individuals belonging to different groups (3rd). During the coming retrograde, Aries can take the lessons they’ve learned from dealing with their colleagues to gain entry into new groups which will greatly expand their networks. For Leo, personal relationships become the doorways into new group collaborations. Sagittarius can use the rich diversity of their communities to find new ways of being with others, and ideally realize that each relationship has its own unique alchemy.

For Water rising signs, the Mercury Elemental Year of Air will activate the houses 4, 8 & 12. Because the 4th is about family, but also legacy, I have dubbed these houses the Trigon of Dynasty. It is posited that these retrogrades will most significantly impact the 4th house of biological family and ancestry; the 8th house of marital, business and extended family, and the 12th house of spiritual family. During the coming retrograde, Cancer will find that the fiscal or emotional challenges encountered within marriage or business relationships ultimately have spiritual solutions. Scorpio is discovering that healing their ancestral wounds is the real key to showing up fully for other people. For Pisces the focus should be on what they ultimately want to leave behind when their time here is done — all else is mere detail.

(1) Wikipedia: The City of God

(2) I previously outlined the Air year in overview

and the Aquarius retrograde for the TMA blog.

(5) For a discussion of this quote within an alchemical framework, see for instance: The Archetype of the Holy Wedding in Alchemy and in the Unconscious of Modern Man.

Bio:Gary P. Caton is a Hermetic practitioner integrating diverse traditions, art forms and practices gathered from his spiritual quest over a full Saturn cycle. Initiated an astrologer by a magnificent dream in 1993, he’s since become an accomplished counselor, writer, podcaster, teacher, photographer and mage. Gary is the author of Hermetica Triptycha: The Mercury Elemental Year, and host of the popular Hermetic Astrology Podcast. Connect with him at www.DreamAstrologer.com