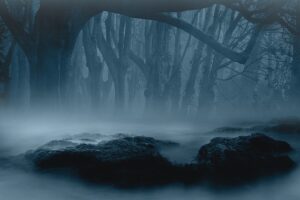 Notes
Astrology behind the scenes:
1. Moon in Scorpio is in her fall, dignity wise.
2. Moon in Scorpio trines Mars in Pisces.
3. Mars in Pisces is within one degree of Neptune in Pisces.
4. The Lunar Eclipse begins: the Earth comes in between the Sun and the Moon, shedding darkness on the Moon. We had a Solar Eclipse two weeks ago. And that time, it was the Moon that came in between the Earth and the Sun covering the Sun. Click here for my previous article on the Solar Eclipse.
5. The Moon in Scorpio squares Saturn in Aquarius. The Moon’s exclamation is due to the quick succession of aspects from Mars, to Saturn, to Neptune, to Sun, to Pluto that make Moon feel like it is being harassed from all sides whilst being eclipsed!
6. Moon in Scorpio trines Neptune in Pisces.
7. The eclipse is taking place in the 19th Lunar Mansion called Al-Shaulah, The Sting.
8. Lunar South Node Eclipse on May 16, 2022 at 04:14 UTC at 25º Scorpio. For more on how the Lunar Nodes work, click here.
9. North Node in Taurus, South Nodes in Scorpio. For more information about the eclipses on this axis, please click here.
10. Maat is the Ancient Goddess of the Cosmic Order, Truth, and Justice.
11. Moon in Scorpio sextiles Pluto in Capricorn. Pluto is retrograde, and will return to that degree on January 28, 2023.
12. The Moon moves from 23º Scorpio and makes all of these difficult aspects before entering Sagittarius.

Hilaria (Hilary) Spiteri is a pharmacist and holistic health practitioner. When she least expected it, she fell in love with the stars, hesitantly followed but never looked back. She was born on the island of Malta, a crucible of many European and Semitic cultures. She now lives where Rome, Italy, meets the Mediterranean Sea. Hilary is a traditional and medical astrologer trying all her best to bridge the modern artificial schism between science, medicine, astrology, spirituality, and healing. She nurtures a personal dream to bring back medical astrology to the academic world and the general medical and pharmaceutical practice. In the meantime, when not reading a book, chart or talking to a client, you can find her walking near the sea or in the countryside. Or, if you prefer, on her website acquafortisastrology.com.